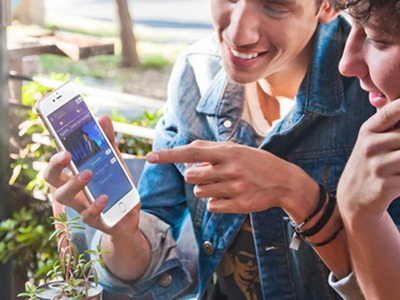 Portable devices are taking over the screen based media. On one hand the trend of multiscreening is on the rise with 78 percent of the US adults admitting they use smartphone, tablet or a computer while watching TV. While they would mostly browse the internet or use social media for activities unrelated to the content on TV, the portable devices are slowly taking the core role of television – watching video. 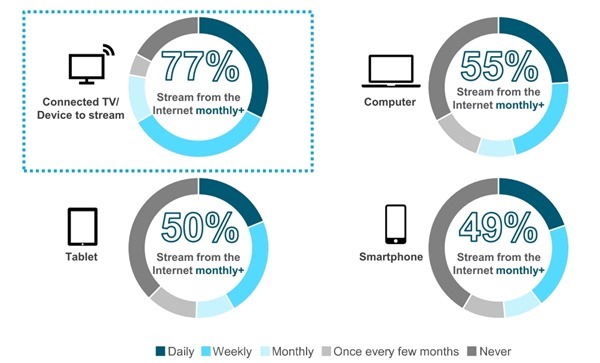 Three in four people who own both a connected TV or a device enabling streaming say they stream video at least once a month, according to a survey from Internet Advertising Bureau.

Meanwhile another study, this time by Accenture, show an ongoing trend in watching the content that was TV exclusive not so long ago. 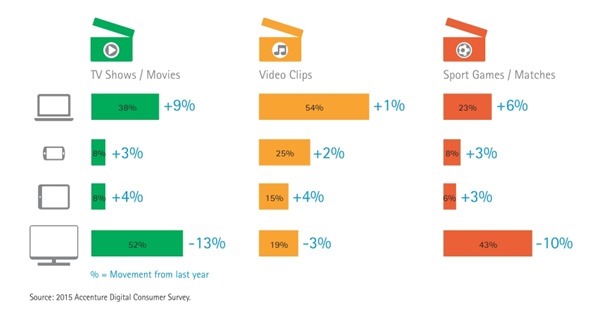 Computers dominate Video Clips category. Although TV Shows, Movies and Sport Games are still being mostly watched on the television screen, the share is shrinking rapidly by double digits year to year.

The future of the trend is quite easy to see when observing the youngest group. For the teens the second screen is the first screen already. They are watching TV Shows and Movies more often on a PC than on the TV set. And if the trend continues in the next couple of years, the tablets and smartphones will overtake the traditional devices.

For the broadcasters it’s not only a change of the channel through they access their audience. The switch to mobile will also affect their business model. Digital streaming will bring change to advertising. The mass “water cooler effect”, when the audience eagerly discussed the things they saw the previous day on TV, is disappearing.  So is the opportunity of selling 30-second commercials for millions.

However distributing the content via streaming creates new advertising possibilities. Today second screen apps and platforms, like 4screens, while engaging the viewers encourage them to log in via Facebook, Twitter or any other social media account. It enables creating a base of personalized audience, tracking their customs and tastes. TV broadcasters will learn how to use the data and come up with advertising formats that will use multiscreening potential and lead the viewer from interesting content, through a commercial, to a point of sale. All during the programming.

The change is quite revolutionary and nobody has a ready solution yet. That is why it is important to start trying new formats now. The sooner the broadcasters start to build a personalized viewers base, the higher chance they have of coming out victorious.