A new survey from Internet Advertising Bureau shows that multiscreening is on the rise.  As much as 78 percent of US adults admit they watch TV using another device. Two in three smartphone owners multiscreen while watching TV, which makes it the most dominant second screen. The next are computer and tablet. Over 50 percent of people using these devices tend to do it when watching TV.

The trend is becoming more common as 84 percent of smartphone multiscreeners do it on a daily basis, with respectively 79 percent of computer and 65 percent of tablet users. 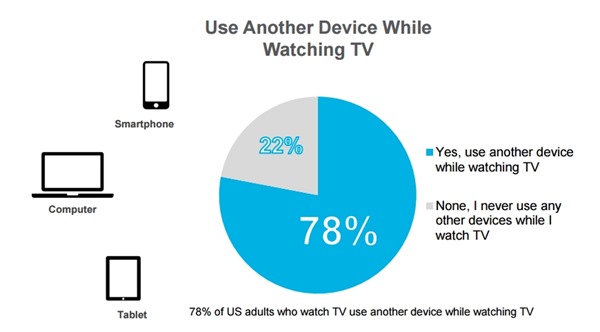 The portable devices are usually working as a true “second screen”.  The viewers admit that when watching TV they are more likely to pay attention to the broadcasting that to the activities on smartphone or tablet. Computers are more engaging and these multiscreeners tend to share their attention equally between the two. 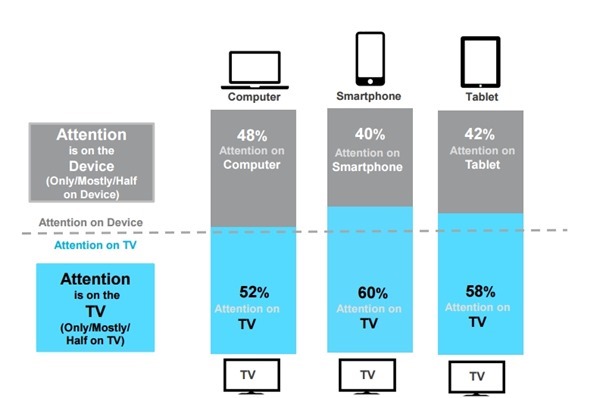 The qualitative research by IAB gives also some interesting insight to the viewers behavior. Some multiscreen when watching content chosen by other family member. A young father says:

I multi-screen when watching children’s shows with my daughter, but I’m less likely to do so when watching a thriller or horror movie

The attention depends also on the content genre. A middle-aged woman says:

If I’m watching a soap opera or a comedy I almost always multiscreen. If I’m watching something that I need to pay attention to like Blacklist or Walking Dead, then I don’t multiscreen because I want to concentrate on the show. 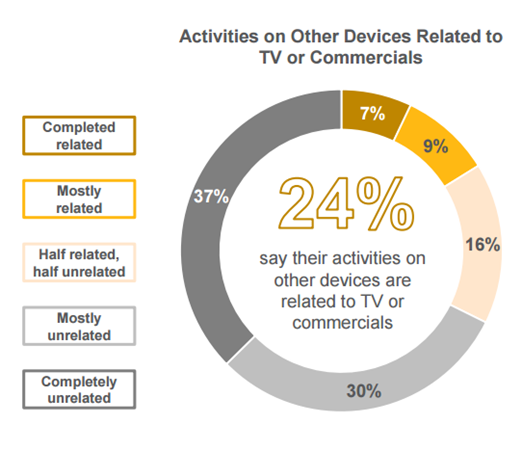 One in four viewers admit that their multiscreen activities are related to the programming or commercials being aired. This is a bigger part of the audience than in earlier studies. Some of the experience are also encouraging for the broadcasters investing in second screen engagement.

I’ve found that some streaming services have started tailoring
some of the commercials to the viewer’s interests so you’re not
watching a commercial about a product/service that is of no value/interest – a middle-aged man says.

The commercial break seems to work well with a second screen experience. As some respondents admit:

I’ve even purchased a few products and I believe a service or two via this method. If I’m Googling I’m looking for their website.  If I’ve searched, found their website or went directly to their site I’m usually searching for more detailed product/service information â€“ says a middle-aged man.

It seems multiscreening is a natural trend that has been embraced by the vast majority of portable device owners. It is how we watch TV nowadays. What’s more interesting and encouraging for the broadcasters is the growth of programming related second screen activities. It takes time for the TV producers and advertisers to learn how to fully use the potential of second screen.

It seems to be a useful tool to boost the viewers engagement and create new, more efficient advertising with commercials that are not only building brand awareness but are useful for the customers.

With second screen solutions we can turn the idle commercial break to practical time-saving shopping time.